Readying and a Room Reveal

We tend to specialize in Christmas crazy around here. We say yes to people, parties, and trips and no to keeping up on laundry, dishes, and sleep. We are slowly learning how to balance the rushing with the resting, to pause the crazy for the Christ-centered. But we once again find ourselves scrambling.

Our tidying goals are unmet, presents are yet unwrapped, exhaustion is creeping close. And yet, in the midst of falling short once again, I find comfort in knowing we haven't completely missed the point. We've spent hours preparing a room for guests. We've cleaned the house top to bottom to invite in friends. We've shopped intentionally in anticipation of seeing loved ones. Yes, we're tired and yes, schedules are overbooked, but advent isn't missing.

We have room to grow but are thankful for grace. Praying you're finding joy during this Christmas season. Happy Advent, dear ones.

Here's a peek at our first fully completed room in our home! So thankful for the many opportunities to host friends and family.

And if you've read this far with me, can I whisper happy a moment? This happened a few days ago....surreal moments full of anticipation. Can't wait to see God show up!
Posted by Anne at 7:28 PM 2 comments:

Anticipation
Early December was filled with little steps toward becoming a couple, including this gem of an evening.

We shared our first slow dance to the song "I Don't Want to Miss a Thing." We laughed. We kept talking. The following weekend we went ice skating with a group of friends, and I glared at him as he paid for my skates. (This dependence/submission thing does not come easily for me. :-) I looked at other couples in the rink holding hands while they skated and wondered about our path. Though it was well into a Friday evening, he asked me to be sure to not check my mailbox until the following day. My mind kicked into high gear at his odd request, but I tried not to push the matter any further.


The Search
My excitement, however, didn't stop me from sleeping late into the morning and walking to the cafeteria unshowered and dressed in sweats with my roommate. We ate quickly and dashed over to the RSC to see what Nate was hinting at the night before.

I opened the envelope with the block handwriting I was growing to love and found a scavenger hunt clue. 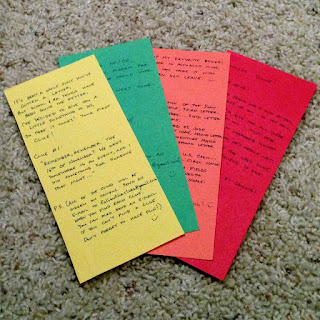 My roommate wished me well and returned to our room, while my friend Krystal and I ran across campus. We quickly found the clues at the at the Bultman's Center's potted plant, the library, and my RD's apartment. The last clue directed me to call his best friend Michael, an intimidating feat to say the least.

I bolstered my courage and made the call at about 2 in the afternoon and heard the following message: "Hey, this is Mike. Leave a message." I attempted to leave a sensible message, waited what I thought was an appropriate amount of time, and called again only to hear the same message. I learned later that I went through the clues faster than Nate had anticipated, so he asked me to wait.

Snowing and Swooning
I spent the afternoon and evening trying to accomplish something, as it was the Saturday before finals week. I kept checking my phone, hoping I had missed a call. Finally at 7:30 pm, Michael called.
"Hi Anne. This is Michael."
"Hi."
"So...do you have plans for tonight?"
"Uh...no." What else would I have planned?
"Ok, good. Keep that way, and I'll call you back soon."

To pass the time I dug through my closet trying to figure out what to wear. I settled on a plain black t-shirt thinking it would look nice enough without trying too hard and would keep me cool enough to counter my nervousness. Finally at 8:30 pm, Michael called again and said he was coming by to pick me up.

As focused as I had been on what Nate would do next, I was completely distracted as Michael and I left my dorm and headed toward their beloved Colenbrander Hall. There was no wind to speak of, a true oddity for northwest Iowa, and the silent snow was breath-taking.

As we made it to the green, Michael's tone turned slightly more serious.
"Anne, you may know that Nate and I are in a relationship...it's complicated."
"Yes, I know." Their facebook friendship is something else...
"But I think it's time to end it."
"Oh really?" Is this going where I think it is?
"Yep, it's time for him to move on."
"Oh...I see."

I smirked as we kept walking, wondering how our little campus suddenly seemed so big. After Michael almost fell on the ice, we finally made it to the back of Coly. And there stood Nate, alone in the parking lot as the snow gently drifted down. Michael stopped and said something, but I didn't hear. I just kept walking straight to him. After a swooping hug, he said, "Anne, I've really enjoyed getting to know you, and I wanted to know if you would honor me by being my girlfriend."
"Yes, of course!"
"Look behind you."

As I turned back toward the building, I say the phrase "Will you?" spelled out in Christmas lights, one letter per dorm room window. I laughed and hugged him tighter. "Do you mind waving at the window between the words?" he asked. As I waved, the blinds of the window went up revealing a group of faces, those who had helped with Nate's plan.

Ending the Night
Despite the impending finals, we extended our night together by watching The Lake House, Nate's favorite chick flick, and trying to read each other's body language to figure out if holding hands was ok. (Nate decided we weren't there yet... ;-) He walked me home, we prayed in the lobby, and I went upstairs replaying the perfect day.

Pulling two all-nighters during the following finals week was totally worth it.

Nate, it may not have snowed last night, but waking up to the snow
this morning reminds me again of God's goodness in giving me you.
Happy five years, sweet man! 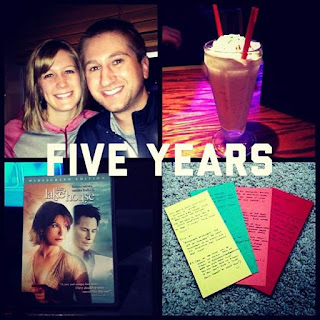 Email ThisBlogThis!Share to TwitterShare to FacebookShare to Pinterest
Labels: Our Story

A shelf in my childhood bedroom is lined with journals filled with the daily prayers of a little girl. A drawer in my desk holds notebooks of poetry and short stories. On those pages is a record of handwriting improvements and sentence structure sophistication; confusion, resolution and pieces of truth that sometimes resonate fresh once again.

While I've written for as long as my memory reaches, something holds me back from writing for others to see. Even my quiet, little corner of the blogosphere, I wrestle with what is worth writing for my sake and what is worth others reading.

But a few weeks ago I read about a writing opportunity, and I felt that little gut-push, the one that squeezes the heart and says, "You know you need to do this." You know what the crazy thing is? They thought so, too. So for the next six months, I'll be teaming up with Holley Gerth and her God-sized Dream Team.

Would you come along on this adventure with me? I don't know where we'll end up, but I'd love to have some familiar faces along the way!

On July 3, 2010, we pledged to fully love and serve God and each other for as long as we both shall live. While that day was perfect and the vows genuine, we have since entered the reality of this commitment. The goal of this blog is to keep our friends and family updated on our successes, failures, and lessons learned in laughter as we strive to follow our Lord and Savior however and wherever He leads. Let the adventure begin!