Our Story: Part I

I'm a story person. I love hearing people's stories. I love hearing them in their own words, even the little ones they don't feel are worth sharing. Those are sometimes the best ones. I've wanted to write down our story for quite some time, especially after being inspired by others who've chronicled how their love came to be. So here's my attempt to bottle up the pile of little sparks that forged the first volume of Nate and Anne. It's not too dramatic. It's quite ordinary. But it's ours. And I wouldn't change a thing.

Spark at First Sight
Our story starts with whispers. With me overhearing these little comments about this guy named Nate, who was a good friend of one of my childhood friends. I'd hear little anecdotes of the adventures of Nate and his best friend Clint as my friend smiled and rolled her eyes at their antics (and prompting several future "Oh you're THAT Clint" moments). When I was preparing to go to college, my friend mentioned Nate would be among the many students I'd be joining on campus.

When I arrived at Northwestern, we had a few run-ins of no particular significance. He played golf, I played golf. We worked in the concession stand together one afternoon. I avoided him. He recognized my last name on the sweatshirt I was wearing in the cafeteria one day. He said hi. I blushed.

He was an upperclassman and an RA, and one of my first college friends had a crush on him. He was clearly out of my league, and the thought of being anything more than acquaintances never crossed my mind.

That is, it never crossed my mind until I was watching That 70's Show with another guy's arm around me. My eyes couldn't help but wander over to this guy walking down the hallway, a guy with a confident yet easy-going stride, a quick smile, truth-telling eyes. Oh those eyes...

At the time I would've said I was just applauding God's creation, but now I think of that night as the first time I truly saw Nate. The night I felt that first little wow moment. That first little spark...


Happy birthday, sweet man. Thanks for making me a part of your story.
Posted by Anne at 10:59 AM 1 comment:

Email ThisBlogThis!Share to TwitterShare to FacebookShare to Pinterest
Labels: Our Story

Sometimes a simple gift is all it takes for me to feel loved by my man. 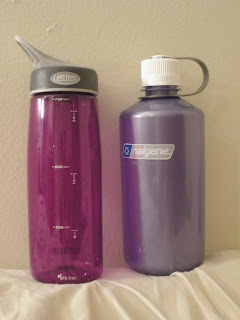 The bottle on the right will soon be traveling with Nate and me to the Dominican Republic. To follow along with our group's antics, check out our team's blog. I'll be sure to give an update when we're back. Thanks for your prayers!
Posted by Anne at 4:35 PM No comments:

On July 3, 2010, we pledged to fully love and serve God and each other for as long as we both shall live. While that day was perfect and the vows genuine, we have since entered the reality of this commitment. The goal of this blog is to keep our friends and family updated on our successes, failures, and lessons learned in laughter as we strive to follow our Lord and Savior however and wherever He leads. Let the adventure begin!